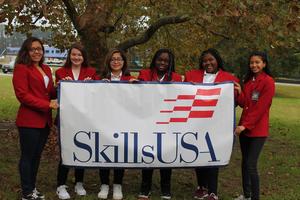 The SkillsUSA National Statesman and Advanced Statesman Awards are presented to members who demonstrate SkillsUSA knowledge and civic awareness, along with an understanding of the SkillsUSA Framework and how to articulate their personal technical and career education (CTE) experience. To receive the awards, a student must attend and participate in the annual fall leadership conference for their state.   Maryland holds its' conference each year in early November.  Over 600 students from across the state of Maryland attended this year’s conference, which was held at the Carousal hotel in Ocean City, Maryland. JM Tawes sent 15 students to this year’s conference including five of the JM Tawes Chapter’s Officers.To receive the Advanced Statesman Award a student must have attended two fall leadership conferences and received their Political Leader Award at the first conference as a prerequisite.  Both awards come with a certificate as well as a lapel pin to wear on their SkillsUSA jacket.