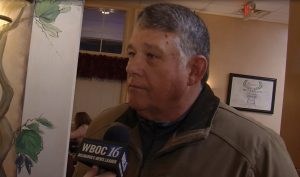 Mr. Laird has served 42 years as a Somerset County Public Schools' bus driver and bus contractor. He became a contractor in 1981 and has remained in that capacity for the last 37 years. Prior to becoming a contractor, he was a substitute driver for Nevitt Muir, Jack King, Juke Sharpless and Walter Laird. Mr. Laird won WBOC’s Jefferson Award this year. He is in his 18th year of coaching Washington High School baseball. In addition, he has coached the Salvation Army’s Football team in Princess Anne since 1976. He has coached American Legion baseball. He is the President of the Princess Anne Ruritans and is a member of the Sons of the American Legion. Other Awards include Maryland’s Most Beautiful, Boy Scout Award for Outstanding Citizenship, and two time Bayside Baseball Coach of the Year. Mr. Laird has been married 42 years, has three children and four grandchildren. In addition to his work as a bus contractor, he is an owner and operator of multiple chicken houses. Click on the title and then on the link for more information.
http://www.delmarvalife.com/delmarvalife/brian-laird-second-ten-2018-wboc-jefferson-awards-winners/