Woodson Elementary School to Take Part in an Opening Day National Initiative Known As the Million Father March-Relationship Building Will be Emphasized. 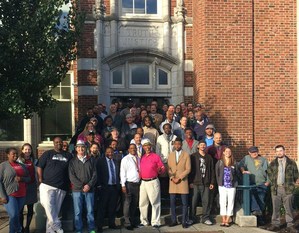 The administrative staff at Woodson Elementary School has spoken to or sent letters to local churches as well as Crisfield City Council, Marion and Crisfield Fire Departments, Crisfield Post Office, Crisfield Police Dept, Maryland State Police, Somerset County Sherriff's Dept, Men of Promise men's group, UMES Student Life, SU Greek Life, and the Coast Guard. Assistant Principal Terra O. Taylor has invited numerous men from the aforementioned organizations to be on hand by 8:00 AM on the opening day of school September 5. These men will be asked to position themselves in the front of the building where the busses arrive each day and at the door facing the parking lot where walkers and those driven to school in family vehicles arrive. Click on the title for more information.
The Million Father March is an opportunity for men to show their commitment to the educational lives of their children on the first day of school and throughout the school year. Since the March began in 2004, fathers and other significant male caregivers across the country and around the world have been asked to take their children to their first day of school. The Million Father March is the beginning of a year-long commitment of men to their children’s educational success.

More than a million fathers, grandfathers, uncles, and father figures are expected to accompany their children to the first day of school in the U.S. this year, inspired by the vision of 10 men who met in a Chicago church basement eight years ago. Phillip Jackson, one of the co-founders of the Million Father March, describes a program that has grown organically from 40 cities in 2004 to 767 in 2011, the first year the movement hit an estimated "more than a million" mark. "There are so many cities where the Million Father March morphs into other activities," says Jackson.

Woodson Elementary School Assistant Principal Terra O. Taylor is leading this initiative at the school.  She stated the following in a recent letter to the groups and organizations.

'We are excited about a new year and new opportunities to provide positive experiences for our students. This year we would like to participate in the Million Father March initiative that partners with male organizations in our area to welcome students back to school on Tuesday, September 5, 2017. Our hope is that a plethora of positive male figures will be encouraging and exciting for students to witness in a female dominated profession. We are also anticipating that this event will help to forge a long-lasting partnership with your organization as well as build relationships with our students and staff. The event will begin at 8:00am for student drop off through the end of homeroom and conclude with a thank you continental breakfast around 9:00am.  If representatives from your organization are available to participate in this event, please contact Terra Taylor at 410-968-1295 by September 1, 2017.     Thank you so much for all you do in our community for our students. Feel free to contact me if you have any further questions or concerns."