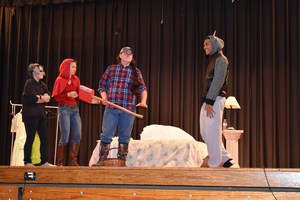 The Musical Theater classes at CHS put on their very first short play. They have their own production team of Assistant Director, Stage Manager, and Costume Designer. They had 17 days to get a script, get a part, design a set, develop their character's backstory, memorize the script and blocking, and put the show on!
They performed the play twice on Friday February 24, 2017.