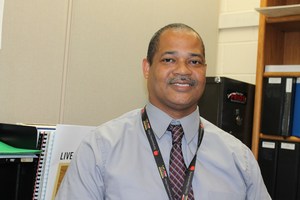 The Supervisor of Special Programs William P. “Will” Gray will be appointed as Acting Principal effective Monday, November 28, 2016 to June 15, 2017. This is a temporary appointment. Mr. Gray brings significant classroom and administrative experience to the position. Click on the title for more information.

He served as a secondary science teacher from 1999 to 2012 in Queen Anne’s and Dorchester Counties.  He was appointed assistant principal at Crisfield Academy and High School in 2012 and worked in that capacity until 2014.  As of 2014, he was named Supervisor of Secondary Science/Mentor Coordinator.  He has continued in the role of Supervisor of Special Programs/Mentor Coordinator to the present time.  As a mentor coordinator he has provided assistance to several nontenured teachers, conducted professional development/new teacher orientation at the beginning of the school year and facilitated meetings with individual teachers or groups of educators to refine teaching practices.  He understands the observation and evaluation process and the procedures to maximize performance.