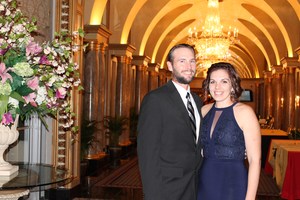 Deal Island Elementary School math, science, STEM and Gifted and Talented teacher Kolby Noble was honored at the state's annual Maryland Teacher of the Year Gala on Friday October 7. Noble and her 23 counterparts from throughout the state were honored for their excellence in instruction. Click on the title for more information.
She was accompanied by her husband Nathan Noble, her mother and father Keith and Pat Davis who is a retired science teacher.   In addition, Deal Island Principal Ted Gibson was at the event along with  Noble's fellow Deal Island Elementary School teachers Rebecca Pratte, Michele Messick  and Jamine Webster.  Board Chairman Warner Sumpter, Superintendent Dr. John Gaddis, Deputy Superintendent Tom Davis, Director of Schools  Tracie Bartemy and Supervisor of Transportation Michael Bartemy were also at the event to celebrate with Mrs. Noble.  President of the Somerset Teachers Association Vestina Davis, SCPS 2015 Teacher of the Year Melodi Power and 2016 Secondary Teacher of the Year Ginger Wilson joined in the festivities making the trip to Baltimore. The table at which Mrs. Noble, her family and the Superintendent sat was sponsored by the University of Maryland Eastern Shore.  Five of the education staff were in attendance.
Athanasia (Sia) Kyriakakos,- Mergenthaler Vocational Technical Senior High School, Art teacher in  Grades 9-12 in Baltimore City was named Maryland Teacher of the Year.