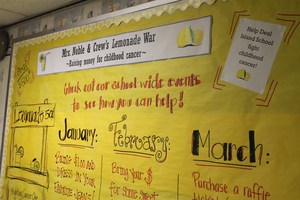 In a recent email to the Superintendent of Schools Deal Island Elementary School math and science teacher Kolby Noble wrote, "Just wanted to give you some good news on a Friday...just got word we won the Lemonade War. Of 38 schools across the country...East Coast, Texas, California..we placed first with $4,000." (Click on the title for more information.)

Deal Island Elementary School fourth and fifth grade math and science teacher Kolby Noble was looking for a novel she could read during math class, since it's probably rare for students to be exposed to that type of literature.  She said,  "I chose "The Lemonade War" by Jacqueline Davies, which was a story about a brother and sisters battle to beat each other in raising money in lemonade stands,  There was a focus on financial literacy which is something my students also needed more exposure to. Mostly, though, I got on board because we all know and love people affected by cancer and it was the perfect opportunity to honor them as well as teach my students empathy and giving back.

Her fourth and fifth grade students  were the ones who read the book and participated in most of the money raising, but as always the entire school and staff always supported us through casual days, lemonade stands, and bake sales. Many community members gave huge donations...some we knew, some were complete strangers. We definitely couldn't have raised $4,000 without everyone's support.

in January we held a cadual day, February was a bake sale,  and in March my 4th and 5th boys and girls had a "war". They each collected donations in various ways and both raised more than $1,000 just in March. Of course there were  lemonade stands scattered throughout the course of the fundraising from January to April."

Director of Schools Tracie Bartemy said, "I think it's wonderful what Ms Noble is modeling for her students.  She is showing children how to make a difference and the importance of community and giving to others.  Ms. Noble is helping others know resiliency. She's showing children how set backs in life can be overcome."