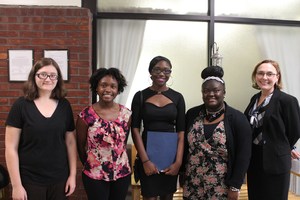 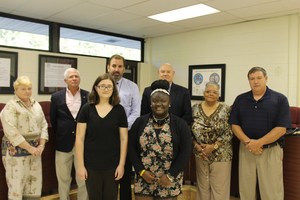 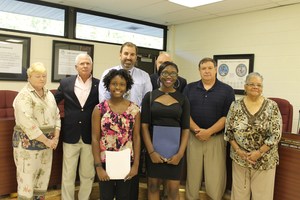 On Tuesday September 15, 2015, at the monthly Board of Education meeting, four Somerset students were named as representatives and alternate representatives to the Somerset County Public Schools Board of Education for the 2015-2016 school year. They will report on school events within the county, provide opinions on topics when questioned by Board members and assist with information as designated.
Supervisor of Instructional Technology and Social Studies Jill Holland introduced student Board of Education members from each high school and their alternates. The following students were introduced. Click on the title for additional information.

"Alexis Bell is a Crisfield High School senior and 2015-16 SCPS Student Board Representative.   Alexis is the daughter of Clarence and Debbie Bell of Marion. Miss Bell is a conscientious student with a commitment to academics as well as extra-curricular activities. In addition to taking classes at UMES and Wor Wic Community College, Alexis has participated in any number of volunteer, school-related functions such as helping with Woodson’s Haunted Hallways and Sports day. Alexis enjoys basketball and tennis in her spare time. She plans to attend Salisbury University after graduation to pursue a career in family and marriage therapy. When asked what current issue concerns her, Alexis cites the lack of ambition and determination in young kids to do better.”

“Jocelyn Elmore is a Washington High School senior and 2015-16 SCPS Student Board Representative. Jocelyn is the daughter of Sharone Terrell and Robert Elmore of Princess Anne. Miss Elmore is an outstanding student with a commitment to every aspect of life at WHS. Jocelyn has been involved in Band Front, Cheerleading, Hope Club, and Student Government all through school and has been on the National Honor Society since induction in 10th grade.   She plans to major in Hotel/Restaurant Management in college so she can later own her own restaurant. Current events that concern Jocelyn include pollution, fossil fuel use, and racial profiling.”

“Tara Johnson is a WHS senior and alternate student board representative. Tara is the daughter of Sophia and David Kramer of Princess Anne. Miss Johnson is an excellent student who has been involved in Hope Club, Yearbook, and National Honor Society. She would like to attend college to be either a doctor or forensic scientist. She is most concerned about women’s rights, global warming, and terrorism.”

“DeAuvione Brittingham is a CHS junior and alternate student board representative. DeAvione is the daughter of Angie and Troy Brittingham of Westover. Miss Brittingham is a serious student who has been involved in SADD, Leo Club, and National Honor Society. She would like to attend Centenary College or College Park to become a pediatrician and open her own office. The issue that concerns DeAvione the most today is poverty.”