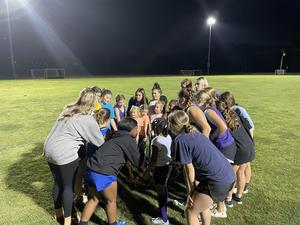 Read more in the press release...
WESTOVER, MD, October 4, 2022 – Crisfield Academy & High School (CAHS) Girls Field Hockey Team recently collaborated with Somerset Recreation, Parks & Tourism to facilitate a fall field hockey clinic at the county athletic fields in Westover, MD. Somerset’s Recreational Field Hockey Team, a group of young girls aged 5 – 14, participated in drills and practice games led by older high school athletes from CAHS Girls Field Hockey Team.
CAHS Field Hockey Coach, Kate Stevens, empowered her student athletes to serve as coaches and mentors to the younger athletes; directing small groups of Rec players through a circuit of drill stations. The clinic concluded with practice games between two teams of paired “big” and “little” players. Stevens shared, “I really wanted to do this clinic because I saw it as a great opportunity for my team to get involved within their community. I wanted the team to remember they were once in the Rec girls’ shoes not that long ago, and how we all need to play for their younger self that fell in love with the game!”
Due to the positive response from both teams of participating athletes, Stevens plans to coordinate with Somerset Rec & Parks on future clinics.