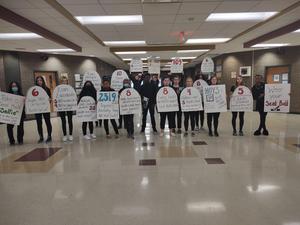 Read more in the press release...
Princess Anne, MD, April 27, 2022 – Washington Academy & High School’s (WAHS) Students Against Destructive Decisions (SADD) club was recently awarded a $500 cash prize as a runner-up in the National Organizations for Youth Safety (NOYS) Seat Belt Challenge. This is the second year in a row that WAHS SADD students have received cash awards from the NOYS contest. In 2021, students won the award for “Highest Seatbelt Use,” earning the club a $1,500 prize. Prizes for the Seat Belt Challenge are sponsored by General Motors, and will support the club’s activities throughout the next school year.
This year, the school’s SADD club developed a tombstone-themed campaign that visually demonstrates the tragic impact of preventable deaths due to improper seat belt use. The awareness campaign included school-wide art, signage and SADD members challenged their peers and staff to share “Seatbelt Selfies” to social media for the chance to win prizes. WAHS SADD Chapter Advisor and School Nurse, Lynne Brumley shared, “Thank you to NOYS and General Motors for giving our students another opportunity to make a community impact with the Seat Belt Challenge this year. I am very proud of the students for their work on the campaign and hope that their influence leads to better decision-making when our drivers get behind the wheel. It very well could save a life!”

WAHS SADD Club member Patrick S.’s tombstone shares the statistic that on average, 109 Marylanders die each year from accidents where the victims did not properly wear a seat belt.

SADD Club Member, Shamoya M., holds a sign that states that 2,319 injuries occur annually in MD due to improper seatbelt use during a car accident.

SADD Club Member Leandre L.’ tombstone illustrates how poor decisions lead to the death of 6 adults in a car accident where seat belts were not worn.